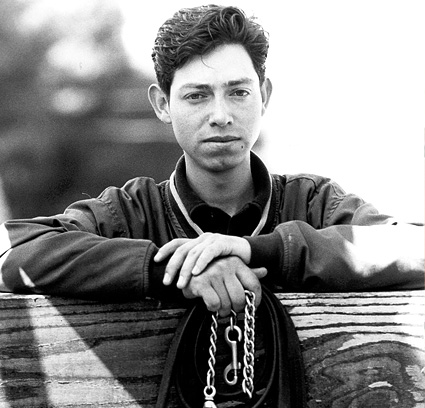 A migrant family from Mexico works at a Kentucky thoroughbred horse racing farm where they experience the racism and discrimination known to many who have left their country in search of a better life. Beyond the Border mirrors the story of over 40,000 Latinos that have come to the Bluegrass Region to work in low-paying jobs in the horse racing industry, tobacco farms, and low-skilled services and manufacturing industries. Beyond the Border follows the lives of four brothers, and how they adjust to the culture that trots around them, as they struggle to reach the finish line.

Over the past decade, thousands of Latinos seeking better possibilities have begun migrating to Midwestern states like Kentucky, with its low-paying jobs in the tobacco, manufacturing and horseracing industries. But as these Latino communities have swelled, so too has the xenophobia and discrimination facing them.

Beyond the Border, follows the immigrant experience with Marcelo Ayala, who leaves his family on a risky journey to the United States. We begin to understand his decision to leave Mexico with the insights of his brothers, who before him, have each made the same journey. Horacio Ayala, has been in the US for a couple of years. He yearns to return to Mexico. Juan, the anchor of the brothers, has managed to realize his dream of a family and stable job in the United States, all the while missing the joy of being with his family in Mexico. Gonzalo, the oldest, has seen his life unravel, with broken marriages, jail time and a constant battle with alcoholism.

Beyond the Border rounds out immigration’s effect on family in Marcelo’s home town of Michoacan, Mexico. Marcial and Carmen, his parents, still toil for what little money they can earn in the depressed economy. The sisters Lupe and Carmen, would like to immigrate to the US, but have remained behind with their Mexican husbands. Finally, Elena, the youngest, dreams of an education, to gain income for the family.

Eren McGinnis has produced several award-winning documentaries for PBS. Her credits include The Southern Sex; Mother Love; The Beauty Salon; Tobacco Blues; Beyond the Border; Kit Kat; and The Girl Next Door. Eren is finishing Bluegrass Opera, which examines the life of opera star Everett McCorvey as he stages Mozart’s Don Giovanni and spreads the Negro spiritual throughout Brazil. McGinnis received a bachelor’s degree in anthropology from San Diego State University, and holds a certificate in film and video theory and production from the University College Dublin, in Ireland.

Ari Luis Palos, a Mexican-American filmmaker, started Dos Vatos Productions, a film and video production company dedicated to bringing the voice of Mexicanos to a nationwide audience. He recently completed Kit Kat, which follows the quest of a young girl as she saves her father’s soul within the folklore, music and beauty of Oaxaca, Mexico. One work in progress is Juchitán, which has its focus on the haunting music, the sensuality and power of the women, and the “Lady Boys,” who are the cross-dressing sons of the families of the Isthmus of Oaxaca, Mexico.

Beyond The Border is a co-production of
Dos Vatos Productions and KET, the Kentucky Network,
produced in association with ITVS and Latino Public Broadcasting.