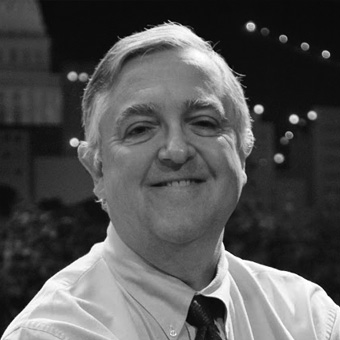 Bill Stotesbery is CEO and General Manager of KLRU-TV, Central Texas’ PBS station. KLRU-TV is a community-owned, non-profit organization, and the non-commercial public television station serving more than 700,000 households in 18 counties in Central Texas, one of the nation’s major media markets and the 22nd largest Hispanic market in the country. As Austin’s Public Broadcasting Service (PBS) member station, KLRU is the only locally owned, major network affiliated broadcast television station in Central Texas.

KLRU has long been associated with its award-winning music concert series, Austin City Limits, the longest running music program in television history. KLRU has also become known as one of the leading producing stations in the PBS system with over a dozen local and regional series and documentaries currently in development or production and more than a dozen Lone Star Emmys in recent years.

Before joining KLRU, Bill had a 25 year career in marketing, public relations, and public affairs, primarily for technology companies. He currently serves on the Board of the Greater Austin Chamber of Commerce and has previously served as a board member and volunteer with many organizations, including as a member of the Board of the Texas Department of Information Resources, Chair of the Texas Center for Educational Technology at the University of North Texas, chairman of the National State Government Affairs Committee of the American Electronics Association, and chairman of Leadership Austin.

Bill is a graduate of the Lyndon Baines Johnson School of Public Affairs at The University of Texas at Austin, receiving a Masters in Public Affairs in 1977. He received a Bachelor of Arts in Communication from Texas Christian University in 1975.