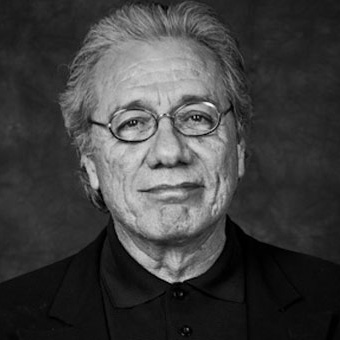 As a producer, actor, writer, and activist, Edward James Olmos has made a lasting impact on Hollywood, on the Latino community, and on the conscience of the country. Born in 1947 in East Los Angeles, California, his ethnically diverse neighborhood — which he refers to as a “salad bowl” because each culture kept its own unique qualities, blending into the whole without losing its individual flavor – was the place his deep-rooted understanding that “there is only one race: the human race” took hold. As a teen, Olmos found refuge in baseball as a means of staying away from street gangs and drugs and soon discovered music. He taught himself to sing and play piano and was good enough to join a band, the Pacific Ocean. The band only produced one album but it gave him the opportunity to discover that he liked being on stage and enjoyed entertaining people. It also gave him the opportunity to meet his first wife, Kaija Keel. They married and had two sons, Mico and Bodie. He has since adopted four more children.He returned to school and earned an Associates of Arts degree in Sociology.

In 1978, he got the pivotal role of El Pachuco in Zoot Suit. The showopened with an expected run of ten days. It ran for a year before going to Broadway. By the time the show closed, Olmos had won a Los Angeles Drama Critics Circle award, a Theatre World award, and was nominated for a Tony Award. Parts in TV series and movies started to come in more frequently, but the trend was frequently to cast Latino actors as gangsters, drug dealers, or other “bad guys,” and this was a trend Olmos was determined to change. He vowed to never accept a role that demeaned Latinos or the Latino community, even if it meant walking away from a paying part.

In 1983, Olmos teamed up with director Robert M. Young to create the acclaimed The Ballad of Gregorio Cortez. The film appeared on public television, but no major movie studio would distribute it. Undeterred, Olmos rented a theater himself and showed the film for free. He believed in the importance of the movie and its message, and, in the end, that was what mattered most to him. The following year, Olmos joined the cast of the extremely popular Miami Vice TV series, retaining creative control over his character of Lieutenant Martin Castillo.  He won an Emmy for his work on the show. Suddenly well-known, he decided to take advantage of his fame by making another movie with an important message – 1988’s Stand and Deliver. “The film is really about the triumph of the human spirit,” Olmos said in an interview at the time. “It’s about something we’ve lost — the joy of learning.” For his portrayal, he received an Academy Award nomination. Believing that the true measure of wealth is what one is able to give to others, Olmos turned even more of his energy towards humanitarian and civic causes. His lecture series, which discussed topics ranging from gang prevention to the celebration of diversity and importance of education to the dangers of domestic violence, took him not only to colleges and universities but also to prisons, reservations, and youth detention facilities.

His company, Olmos Productions, has produced two important documentaries: Lives in Hazard, about the inherent danger of gangs, and It Ain’t Love, a frank discussion of domestic abuse for which he received the PASS award from the National Council on Crime and Delinquency.

In the spring of 1992, Los Angeles was torn apart by riots after the verdict in the Rodney King case. Olmos’s response was to grab a broom and head into the street to start a cleanup effort. By the second day of his cleanup campaign, thousands of people had stopped destroying and started rebuilding. For his efforts, Olmos was given the John Anson Ford Award, and the NAACP honored him for his leadership towards racial unity. That same year, Olmos made his feature film directorial debut with American Me, in which he also starred. The film presented a brutal, painfully real story of a gang member’s life both in and out of prison.

In 1996, Olmos helped found The Los Angeles Latino International Film Festival. Another important effort in which he served as co-producer, The Latino Book & Family Festival, was launched in Los Angeles in 1997 to promote literacy, culture and education and to celebrate the diversity of the multicultural communities in the United States. In April 1999, Olmos launched a multimedia project called Americanos: Latino Life in the United States, a celebration of Latino culture through photography, film, music, and the printed word. It included a five-year traveling photography exhibition organized by the Smithsonian Institution, a music CD featuring Latino artists, and a documentary film. While remaining involved in his numerous humanitarian efforts, Olmos also continued working as an actor. He made numerous movies before teaming up with director Gregory Nava to create the PBS television series American Family in which he portrayed the patriarch, Jess Gonzales. American Family was the first Latino drama on non-cable television. Olmos next accepted the role of Admiral William Adama on The Sci-Fi Channel’s hit series, Battlestar Galactica, and directed an HBO movie entitled Walkout, the previously untold story of the late 1960s Latino civil rights movement.  Most recently, he has been seen in recurring roles on TV’s Dexter and Agents of S.H.I.E.L.D.

In addition to his founding of Latino Public Broadcasting in 1998, Olmos sits on several boards and works for many nonprofit organizations. He is the executive director of the Lives in Hazard Educational Project, a national gang prevention program. He works with disabled and sexually abused children. He is the spokesman for the Juvenile Diabetes Foundation, the Aids Awareness Foundations, Boys Club of America, and the Southwest Voter Registration Project.  He serves on the boards of UCLA School of Film and Theatre, UCLA Mentoring Program, the National Council on Adoption, and the Children’s Action Network. He serves as a trustee for the National Hispanic University and Plaza de la Raza. Olmos has received Honorary Doctorate Degrees from the University of Colorado, Whittier College, California State University and the American Institute in Hollywood and has been honored by both Harvard and Yale Universities.