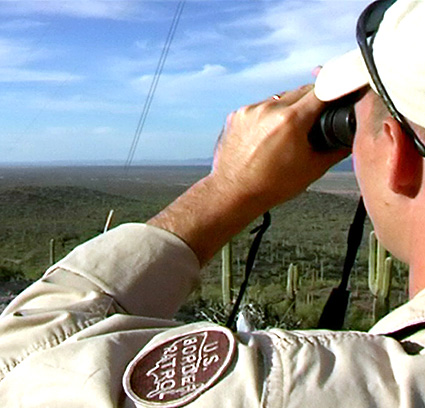 From a small fishing village on the Sea of Cortez, Magdiel is a 23-year-old composer who writes songs about the fishermen who have turned their pangas (fishing boats) into drug trafficking vessels. The economic crisis in the fishing industry forces Magdiel, a fourth generation fisherman, to seek another way of life. His two choices: to traffic drugs to the “gringos” in his fishing boat or to leave his hometown behind and become another of an estimated 10 million illegal immigrants living in the United States. When Magdiel meets a coyote (illegal border crossing guide) who agrees to cross him for free in exchange for a corrido song praising the adventures of the coyote himself, Magdiel begins composing and prepares for the journey.

Al Otro Lado begins in Sinaloa, the drug capital of Mexico and birthplace of Los Tigres del Norte and Chalino Sanchez, two of the most famous corrido musicians. From the Sierra Mountains where opium and marijuana grow in abundance, down to the Sea of Cortez, where contraband is trafficked north in fishing boats, we look at the economic crisis that forces so many like Magdiel to turn to drug trafficking, or to risk their lives crossing the border illegally into the United States. Through the regional corrido music that takes its roots from medieval ballads and has the edgy grit of gangsta rap, we travel from Sinaloa north across the border to the streets of South Central and East L.A., the same journey taken by millions of illegal immigrants, tons of narcotics and even corrido music. A P.O.V. and LPB Co-Presentation.

“Al Otro Lado” is Natalia Almada’s first documentary feature. Her experimental short, All Water Has a Perfect Memory, was an Official Selection at the 2002 Sundance Film Festival and won awards at the Tribeca and Chicago International Film Festivals. In 2003, Almada was a Fellow for both the New York Foundation for the Arts and the NALIP Latino Producers Academy. She recently received a Creative Capital Grant for her new project, El General. A native of Mexico who spent her childhood on both sides of the border, Almada received an MFA from the Rhode Island School of Design. She lives and works in Brooklyn.

LINKS+
PROGRAM RELATED LINKS
P.O.V. Website:
www.pbs.org/pov/pov2006/alotrolado/
Filmmaker’s Website
www.altamurafilms.com
About Us
Latino Public Broadcasting is the leader of the development, production, acquisition and distribution of non-commercial educational and cultural media that is representative of Latino people, or addresses issues of particular interest to Latino Americans. These programs are produced for dissemination to the public broadcasting stations and other public telecommunication entities. LPB provides a voice to the diverse Latino community on public media throughout the United States.
Subscribe to e-Voz Newsletter
Contact Us
3575 Cahuenga Blvd. Suite # 630 Los Angeles, CA 90068 Phone: (323) 969-8000 E-Mail: info@lpbp.org
CLOSE
VIDEO NOT CURRENTLY AVAILABLE
CLOSE