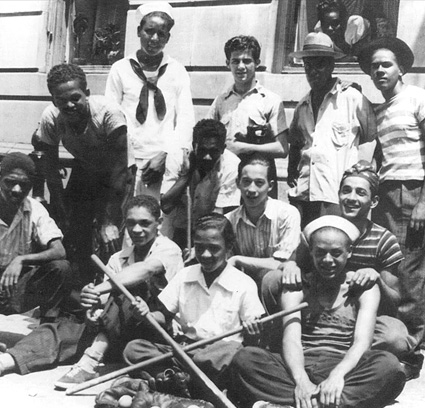 Bragging Rights: Stickball Stories chronicles the vibrant history of the urban game of stickball through its colorful players. Stickball has been played in the streets of New York City since the early 1920’s and is known as “the poor man’s baseball.”

Some of the players testify that, in their lives, stickball has given them much-needed emotional support. Some even go so far as to say stickball has saved their lives. The Clean Machine team is comprised of recovering addicts who use stickball to keep tabs on each other and promote a healthier lifestyle.

Stickball has also broken down racial barriers; if it weren’t for stickball, African-American Charlie Ballard would not have met his “brother” Italian-American Vito Gianonne. The two men have been best friends over fifty years, in spite of the racism they grew up with that discouraged interracial closeness.

We also meet the only woman playing stickball today, Jennifer Lippold. She discusses both the closeness and tension playing ball has caused her, her husband and the other male players.

Looking ahead to the future, Steve Mercado saw stickball as a crusade for hearts and minds of urban youth.  As the tireless President of the Emperors Stickball League in the Bronx, Steve had grand ambitions to make stickball more than just an urban pastime. He had aspirations of making stickball an exhibition game at the 2008 Olympics with his son as the first stickball Olympic player.

The events of September 11th extinguished his dreams. After Steve’s death, we see the league battle between doubt and determination.  Jennifer eventually picks up where Steve left off.  “I guess I’m the new league president,” she says. “I’m not completely comfortable saying that ‘cause I could never do what Steve did but we gotta keep his dream going.”

Under her leadership, the other players step up to keep the league going. They eventually succeed in organizing a well-attended Memorial Day Tournament in 2003, where the street name Stickball Boulevard is amended to “Steve Mercado Stickball Boulevard.”

Sonia Gonzalez has been an editor for over ten years. She learned her craft as an assistant editor for such esteemed directors as Spike Lee, Milos Forman, Alan J. Pakula, Ted Demme and Robert Redford. As an editor, Sonia has cut numerous shorts, the independent features DESTINATION UNKNOWN, EL CIRCULO VICIOSO and AFRODITE SUPERSTAR and NUYORICANS, a documentary for PBS that was aired in August 2003. Sonia has also edited numerous DVD special features, among them: LADY SINGS THE BLUES, FOUR BROTHERS, THE GHOST WHISPERER (Season One), THE FACTS OF LIFE (Season One & Two). Sonia’s directing credits include the short comedy, DEBUTANTE and the documentary BRAGGING RIGHTS, which chronicles the history and players of the New York City game of stickball. BRAGGING RIGHTS aired on PBS/WNET in September 2006. Sonia is currently a co-editor on the feature documentary, ANTONIA PANTOJA: ¡PRESENTE! about the life and work of Puerto Rican educator Antonia Pantoja.

Sonia is also a field producer for DVD and web content. Her producing credits include RESCUE ME, DAMAGES, CANTERBURY’S LAW, NEW AMSTERDAM and CASHMERE MAFIA.  In 1992, she received her BFA from New York University in Film.