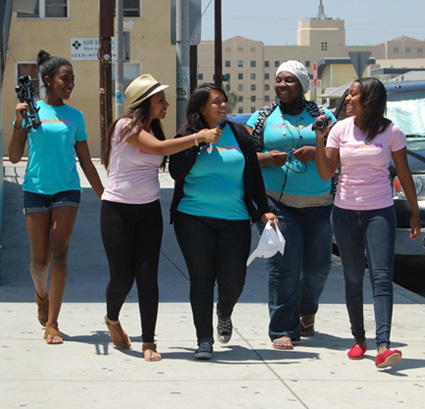 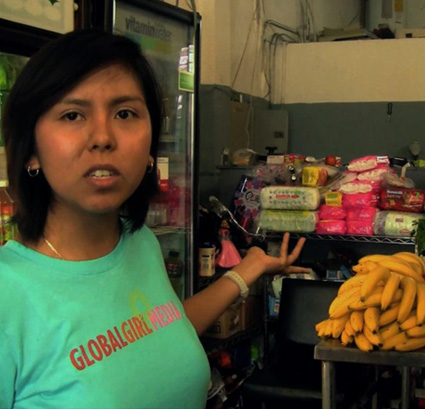 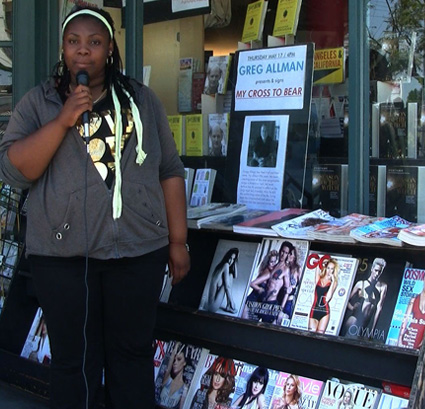 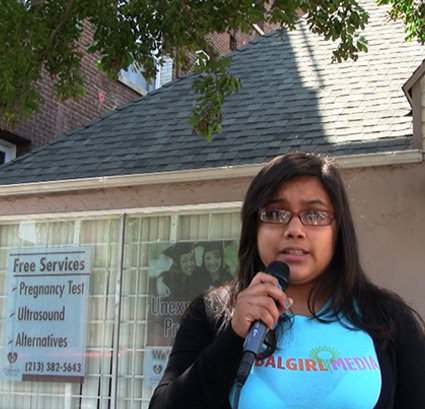 Follow the Los Angeles GlobalGirl Media reporters in this six-part webisode series as they explore local issues that relate to girls; reproductive rights and health.

Episode One: Body Image
GlobalGirls Yasmeen Abdullah and Imani Crenshaw explore the relationship between media representations of the female body and their experiences as teenagers in Los Angeles. Interviewing feminist scholars and academics, Abdullah and Crenshaw highlight the ways dominant culture promotes competition between women and hatred of one’s own body.

Episode Two: Fake Clinics
GlobalGirl Edith Romero reports on abortion clinics and Crisis Prevention Centers, or “fake clinics,” and asks the central question: are young women really given the right to choose, or are they actually being encouraged to continue with their pregnancies? Romero traces the disproportionate impact fake clinics have in lower-income communities, and outlines steps to distinguish fake clinics from neutral abortion clinics.

Episode Three: Human Trafficking
GlobalGirl Ariana Seymore reports the prominence and growth of sex trafficking in California. She interviews two sex-trafficking victims, as well as experts at trafficking rehabilitation centers, bringing to light the causes and consequences of this illegal practice.

Episode Four: Rape Culture
GlobalGirl Andrea Reyes looks into the rise of rape culture in America, a term she defines as the glorification of violence against women. Reyes interviews university professors and feminist advocates, who consider the ways rape culture de-stigmatizes and promotes sexual assaults on women, often by men they know well.

Episode Six: Teen Pregnancy
The Global Girls profile Alexis Lopez, the 14-year-old mother of a 1-year-old girl. The Girls describe the social impacts of a teen pregnancy, including the fact that an astounding 41% of Latinas drop out of high school in Los Angeles due to pregnancy.

Amie founded her own film/video production company, BALMAIDEN FILMS (Gaelic for women who worked in the mines), in 1991, at the dawn of the digital revolution, when the entire landscape of filmmaking was shifting. Never content to stay put when there is a rally, protest, election, or uprising to follow, Amie has been excavating stories from Siberia to Soweto, Tokyo to Nairobi, crossing borders, building bridges and pushing boundaries, as well as her art to activate dialogue and debate. Her work has broadcast on PBS, Al Jazeera, BBC, Current TV and CBC Canada. Her feature documentary films include UNCOMMON GROUND, FALLON, NV: DEADLY OASIS, STRIPPED AND TEASED, ONE DAY LONGER, NO SWEAT, and most recently, WE ARE WISCONSIN, a film about the citizen uprising against anti-worker legislation, recently nominated for an International Documentary Association Award and featured on moveon.org.

Amie also works as a freelance producer for AL JAZEERA ENGLISH, and has produced four films for them: THE DREAMERS, about the Dream Act, HOMEEFRONT, about an female Iraqi vet suffering from PTSD, THE PROBLEM OF PEACE, about the 2007 post-election violence in Kenya, and VOICES OF THE HEART, about a language immersion school on the Wind River Northern Arapaho Reservation in Wyoming.

Amie’s films have won numerous awards, such as the David Wolper International Documentary Association Award, a National Endowment for the Arts Media Grant, the SONY/Streisand Award for emerging female filmmakers, the John D. and Catherine T. MacArthur Foundation Peace Grant. In 2010 she was selected to tour the world by the America Film Institute partnering with other filmmakers in the inaugural 20/20 Cultural Exchange Program. Amie is also in development for a narrative feature film, SAUTI (VOICE), which was selected to participate in the 2007 Film Independent Director’s Lab, and was a finalist in the Ultimate Filmmaker’s Competition by Filmmaker’s Alliance.

LINKS+
PROGRAM RELATED LINKS
GlobalGirl Media
http://globalgirlmedia.org/
Facebook
https://www.facebook.com/globalgirlmedia
PURCHASE
About Us
Latino Public Broadcasting is the leader of the development, production, acquisition and distribution of non-commercial educational and cultural media that is representative of Latino people, or addresses issues of particular interest to Latino Americans. These programs are produced for dissemination to the public broadcasting stations and other public telecommunication entities. LPB provides a voice to the diverse Latino community on public media throughout the United States.
Subscribe to e-Voz Newsletter
Contact Us
3575 Cahuenga Blvd. Suite # 630 Los Angeles, CA 90068 Phone: (323) 969-8000 E-Mail: info@lpbp.org
CLOSE
VIDEO NOT CURRENTLY AVAILABLE
CLOSE