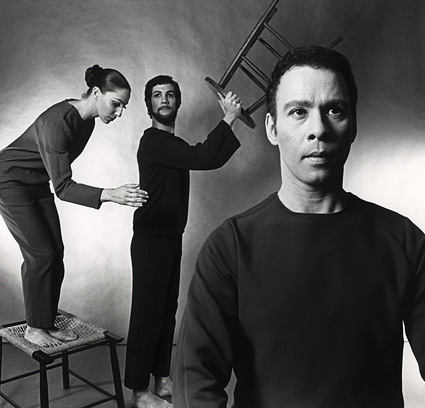 For over forty years Rudy Perez has moved, invigorated and perplexed audiences. In the early 1960s he was hailed as a post-modern pioneer when he was a founding member of the groundbreaking Judson Dance Theater in New York City. Today he lives in Los Angeles and defies definition as he continues to create provocative new work.

The documentary follows the engaging give-and-take of the rehearsal of one of Rudy Perez’ signature dances, Countdown. Los Angeles-born and now Montreal-based Victor Quijada, a protégé of Rudy’s, has come to learn and perform the work. Victor graduated from the Los Angeles High School for the Arts. He was a member of the Rudy Perez Dance Ensemble when Twyla Tharp recruited him to join her company in New York. After five years with the Twyla Tharp Dance Company, he joined Montreal’s Les Grands Ballets Canadiens. He currently is the choreographer and Artistic Director of Rubberbanddance Group.

Throughout the rehearsal process, Rudy’s life and career are revealed through evocative home movies, rare stock footage of New York, and visually exciting experimental films. Interviews with dance critics, former dancers and collaborators give a context to Rudy’s impact on the East and West Coast dance scene. Archival videos showcase significant selections from Rudy’s extensive body of work. The documentary concludes with Victor Quijada performing an emotionally-powerful version of Countdown.

This program began as an assignment to produce an eight-minute profile for the Visiones series (Galan Productions), currently airing on PBS stations. The producer and director, Severo Perez and Rachel Perez-Bitan, a father and daughter team, quickly realized that their eight-minute segment was a terrific promo for a longer more fascinating work about Rudy’s life. Los Angeles dance critic Donna Perlmutter wrote, “Countdown, the title of an excellent documentary by Severo Perez (no relation), is that magical amalgam of music, imagery, atmosphere, and powerful movement-suggestion we call drama.”

Severo Perez has over thirty years experience as writer-producer-director. From 1974 to 1982 he was Head of Production for Learning Garden, Inc. he produced product for corporate and commercial clients including CBS, HBO, MCA Universal, and the Disney Channel. From 1982 to the present he has wored as a freelance filmmaker. In 1994 he completed work on his award winning American Playhouse and NEH sponsored feature film, …and the earth did not swallow him.

Rachel Perez-Bitan graduated with a degree in film and television production from California State University, Monterey Bay. She studied theatre with El Teatro Campesino and has trained in dance with Bela Lewitzky, the Alvin Ailey Dance Company, and Francisco Martinez. She was a recipient of a 2000 Latino Public Broadcasting Emerging Producers Grant. Her 2001 video on date rape, True Stories, was named one of the top ten programs for teens by the American Library Association.