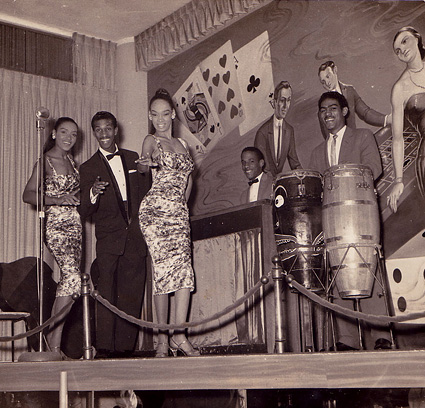 A born rebel and innovator, Lupe Yoli aka La Lupe or La Yiyiyi was renowned for her emotional performances; her renditions of classics such as “My Way,” “Fever” and “Going Out of My Head” were known worldwide. But beyond her musicianship, celebrity and scandal, Lupe Yoli was also a single mother of two, a survivor of domestic abuse, a Santera who later became a Christian Evangelist speaker.

Shot in New York City, Miami, La Habana and San Juan, the documentary evokes two groundbreaking cultural periods through rare archival footage — pre-Revolutionary 1950’s La Habana and the burgeoning Latin music scene in New York City in the 1960’s and 1970’s. The documentary begins with her funeral in 1992, attended by fans, family and the whole of New York’s Latino music aristocracy and follows her from poverty to celebrity and back again.

La Lupe Queen of Latin Soul tells La Lupe’s story through character driven interviews in first person anecdotes, in an oral history much like those found in a folk ballad or a bolero. She was born in a small rural town in Cuba in 1936, one that La Lupe herself loved to describe as “so poor that no one knew it existed until I got famous”.

Her older sister Norma Yoli describes her as a little girl who loved to sing around the house imitating the singers she heard on the radio. One of these was Olga Guillot, Cuba’s reigning bolero singer — our Latin Frank Sinatra.  When the rebellious teenage Lupe wins a radio contest, much like our present day’s American Idol, she gets to meet Olga Guillot in La Habana and to sing on the radio.

By 1957 La Lupe was the rage in the thriving competitive nightlife in La Habana. Rare archival footage showcases Lupe’s peers – Perez Prado, Beni More with Mongo Santamaria, a young Celia Cruz. Helio Orovio, the noted Cuban musicologist describes La Habana in the late 50’s as having the most “intense” nightlife, in the midst of the onset of Cuba’s revolution.

Lupe’s gay following adores her, and the avant-garde follows. A newspaper headline appears: “La Lupe Divides Cuba in Two.” While her inimitable style is described as one befitting the revolutionary times, the headline was a prescient one:  like many artists at the time, she leaves Cuba.  As she herself tells the story: “there was no room in Cuba for me and the revolution”.

La Lupe arrives penniless in New York City in 1962. She befriends the world-renowned Afro-Cuban percussionist Mongo Santamaria, recording with him.  Mongo proudly recalls how he introduced La Lupe to “an American” jazz audience and how Tito Puente stole La Lupe from his band once she became the “hottest thing”.

La Lupe and Tito Puente went on to record a mayor hit in 1964, a Latin classic: “Que Te Pedi” (What Did I Ask of You). Fred Weinberg, La Lupe’s favorite recording engineer recalls their collaboration and the early recording sessions. “She was like a hurricane coming in” with Tito urging him to just “Start recording”. For the next four years they recorded classics and toured the Latin music circuit at the time, in the US, Venezuela, Mexico, Puerto Rico, Panama, Madrid.

Ralph Mercado the Latin music impresario (who was also Tito Puente and Celia Cruz’s manager) recounts their falling out with the hit “Oriente” where La Lupe herself sings: “Tito Puente kicked me out”. La Lupe had gotten too big and Tito had begun to record with Celia Cruz.

Striking out on her own in 1968, La Lupe appears on English language television shows. Dick Cavett in a present day interview sets the context for an audience watching in 1973 – though her performance remains thoroughly contemporary.

Johnny Pacheco the composer, arranger and music producer recounts the birth of Fania records and the origins of “salsa”, the new Latin music sensation.  By 1975 Fania has a new rising star — Celia Cruz; La Lupe’s career is on the decline.  By 1985 Lupe Yoli has rebounded from a descent into homelessness, a period she recounts in her evangelical testimonials, having taken on the preacher’s pulpit at this last stage of her life.

Ahead of her time, often described as the first performance artist and a long-time gay icon, La Lupe’s story is universal in its appeal; with the current boom in Latin pop music, it is also timely — in trying to discover who Lupe was, the documentary is also a collective portrait of mid-20th century Latin musical history.

Ela Troyano is an award winning Cuban-born filmmaker. Her half-hour ITVS short, Carmelita Tropicana, won the coveted Teddy Bear at the Berlin International Film Festival as well as the Audience and Critics Award at the San Francisco International Lesbian and Gay Film Festival. Her debut feature film, Latin Boys Go To Hell, remains a cult hit on the Web and was recently shown on Showtime. Both of these films were screened theatrically in the U.S. and at festivals in Europe, Australia and Japan.

Troyano has also directed episodic action television on the drama series Reyes y Rey and the comedy Angeles, produced by Stu Segall for Telemundo/Sony, and the documentary Urban Youth in the 21st Century for Canal Plus in Spain.

Troyano has also worked as a theater director, most recently in the critically acclaimed Off-Broadway production A to B by Ricardo Bracho, and with video art installations, most recently with renowned composer John Zorn and the Tiffany Mills Company at the Guggenheim Museum, the Walker Arts Center and the Joyce Theater.

Selected awards include a Rockefeller Fellowship, a screenwriting workshop at Sundance with Gabriel Garcia Marquez and funding from Creative Capital, Jerome Foundation, Ford Foundation, Latino Public Broadcasting and the New York State Council on the Arts.

A film by
Ela Troyano

This program was produced by Troyano Inc. which is solely responsible for its content. Copyright 2006 Troyano Inc. All rights reserved