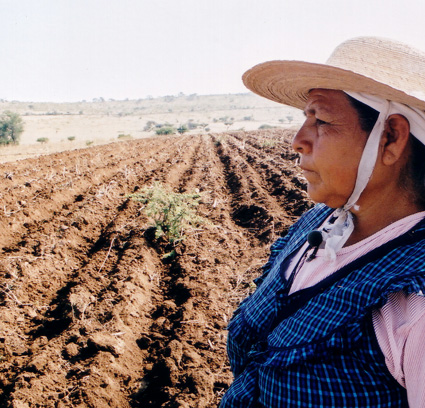 Letters from the Other Side
Producer: Heather Courtney
Genre: Documentary
Program Length: 1 Episode/60 Minutes
Broadcast Date: October 3, 2006
ABOUT THE FILM-

A U.S. Homeland Security official watches a video of Laura, a Mexican woman whose husband died in
2003 along with 18 others in the worst immigrant smuggling case in U.S. history. “How many more deaths does it take for the U.S. government to do something?” she asks.

LETTERS FROM THE OTHER SIDE interweaves video letters carried across the U.S.-Mexico border by the film’s director with the personal stories of women left behind in post-NAFTA Mexico. Director Heather Courtney interacts with her subjects through her unobtrusive camera, providing an intimate look at the lives of the people most affected by today’s failed immigration and trade policies. Her use of video letters provides a way for these women to communicate with both loved ones and strangers on the other side of the border, and illustrates an unjust truth – as an American she can carry these video letters back and forth across a border that these women are not legally allowed to cross. The U.S. House and Senate just passed a bill to build a 700-mile fence along the U.S.-Mexico border, an enforcement-only bill that will only lead to more deaths at the border and do nothing to address the complex issue of immigration.

LETTERS FROM THE OTHER SIDE provides the human context that has been missing in all the political rhetoric. Focusing on a side of the immigration story rarely told by the media or touched upon in our national debate, LETTERS gives voice to those who deserve to be heard, painting a complex portrait of families torn apart by economics, communities dying at the hands of globalization, and governments incapable or unwilling to do anything about it.

Heather Courtney is a filmmaker, cinematographer and photographer based in Austin, Texas. Her recently completed LETTERS FROM THE OTHER SIDE, which uses cross-border video letters to tell the immigration story from the perspective of the women left behind in Mexico, premiered at the Slamdance Film Festival in January, screened at the South by Southwest International Film Festival (SXSW), and was funded by a Fulbright and grant from the Independent Television Service (ITVS). It aired on some 60 PBS stations around the country in Fall 2006.

Her previous film, LOS TRABAJADORES/ THE WORKERS, won the Audience Award at SXSW in 2001, and was broadcast nationally on the PBS series Independent Lens in 2003. In addition, it has screened at over 40 national and international film festivals and conferences, as well as at countless grassroots screenings in conjunction with immigrant rights groups all over Austin and the rest of Texas. She is currently producing the Texas segment of a national PBS documentary on the health insurance crisis.
Prior to receiving her graduate degree in film, Heather spent eight years writing and photographing for the United Nations and several refugee and immigrant rights organizations, including in the Rwandan refugee camps after the 1994 Rwandan genocide.

DVD copies for this program are currently available.