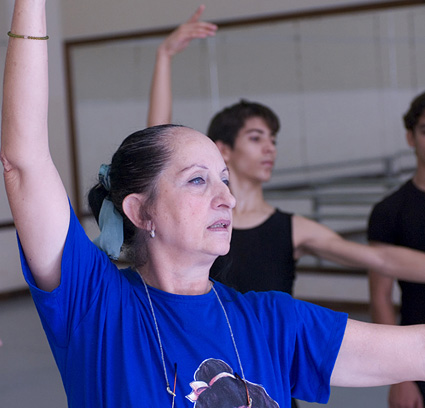 Two sisters. One passion. Romance. Revolution. MIRROR DANCE is the story of Cuban-born identical twins Ramona and Margarita de Saá, who become estranged through politics when one moves to the United States and the other remains behind. Though separated for almost 40 years, both continue to share a passion for dance. Shot in the United States and Cuba over a period of four years, the film reveals some of the complexities of the sisters’ relationship: the worlds in which they live, the choices each has made and the conflicts each has endured. Set within the context of the turbulent dynamic between the two countries, MIRROR DANCE focuses on the twins’ story of division, difference and ongoing efforts at reconciliation. It is a universal story that speaks to the personal pain, loss and waste that can result from international hostilities. MIRROR DANCE will be broadcast on Independent Lens, hosted by Edie Falco, on Tuesday, November 15, at 10:30 PM (check local listings).

Margarita flourished in the system, rising through the ranks from corps de ballet to prima ballerina. She married John White, an American who was recruited by Alicia Alonso to dance with the newly formed National Ballet of Cuba. Ramona married Santiago Bello, one of Castro’s close associates.

Using old family photographs and archival footage of their days as young dancers in Havana, including footage of Margarita performing in Enrique Pineda Barnet’s film Giselle, MIRROR DANCE introduces viewers to the sisters and their worlds. In addition, archival and Super 8 footage recalls Havana in the turbulent ’50s and early ’60s when the twins were growing up, during their respective courtships and marriages and through the political events leading up to their dramatic separation. A soundtrack that mixes original music composed by Cuban-born Elio Villafranca with trational ballet music further evokes the era.

Following their marriages, the twins began to grow apart. In 1964, concerned about the changing political environment, Margarita, her infant son and her husband-now a ballet master-made the painful decision to leave their life, careers and family in Cuba. Ramona remained in Havana. A self-described “revolutionary woman,” she was dismayed by her twin’s lack of commitment to the revolution. Believing Margarita was a traitor, Ramona refused to have contact with her.

In the 40 years since the sisters’ separation, Margarita and John opened a small dance academy in Narberth, Penn., near Philadelphia, where they remain committed to helping young dancers pursue their dream. Ramona became director of the Cuban National Schools of Ballet. It was not until 2000, after being approached by the filmmakers that Margarita began to think seriously about returning to Cuba.

In the film, Margarita reflects, “When I left Cuba I didn’t just lose my biological family, I lost something very special to me-the National Ballet of Cuba. I lost two families.” Despite pouring her heart into her work and trying to create a new ballet family in the United States, she remains haunted by memories and loss.

In Cuba, the film follows Ramona in her routine as the sole woman who determines the fate of every aspiring dancer in the country, and viewers experience the all-encompassing, government-endowed National School of Ballet.

Finally, on February 28, 2004, Margarita, her husband, John, and her daughter, Melinda, depart for Havana. In a touching scene at José Martí Airport, Margarita, Ramona and their brother, Jovito, are finally reunited.

Still, the short visit between the twins remains guarded. On Margarita’s last day in Havana, a visit to their parents’ grave helps the twins put the loss of the past 40 years into some perspective. The desire to recover their past relationship exists, but as Margarita reflects, it will be work. “The ice has been broken to continue this relationship. But we have to work at it, in person.”

But once again, politics intervene in the twins’ relationship. In June 2004, the U.S. government tightened travel restrictions to Cuba. Now Margarita must wait until 2007 to see her sister again. Like the ongoing political situation between the United States and Cuba, the twins’ story still awaits an outcome.

McElroy began her career as an independent filmmaker in 1991, when she founded Shirley Road Productions, an award-winning nonprofit independent production company in Philadelphia. She is especially drawn to subjects that relate to the arts, community development and social change, often with an international perspective. Recent production credits include Ballycastle, a documentary she produced and directed, which tells the story of Stuart Shils, a Philadelphia painter of Jewish heritage whose infatuation with a remote Irish village changed his life. The film won a 2004 CINE Golden Eagle Award. An Angel in the Village, a documentary McElroy produced about Chinese-born community-based artist Lily Yeh, premiered nationally in 1999. It received a regional Emmy Award, First Prize for Documentary Excellence from the Society of Professional Journalists, Greater Philadelphia Chapter and a Gabriel Award.

Before becoming an independent filmmaker, McElroy was director of program development and an Emmy award-winning producer/director at WHYY Philadelphia. Her credits include Philadelphia’s Ed Bacon, a documentary about renowned city planner Edmund Bacon, and Who is Red Grooms?, a documentary about the beloved American artist. In 1987/1988, she directed INPUT 1988, the International Public Television Screening Conference.

Rodríguez is an award-winning producer/director whose work has screened both nationally and internationally. She is drawn to subjects that explore family, memory and community, often in a cross-cultural context. Her previous work includes Under New Management, which was commissioned by WYBE’s Philadelphia Stories, and From Here to There/De Aquí a Allá, which received First Place for Short Documentary at the XVII International Film Festival of Uruguay, played at the Smithsonian Institution and was acquired by WGBH Boston’s La Plaza. Rodríguez also directed six half-hour programs on literature and the arts for GED Connection, a PBS educational series. She has facilitated community media projects through Scribe Video Center and is the recipient of numerous grants and fellowships, including a Pew Fellowship in the Arts.

The Philadelphia Volunteer Lawyers for the Arts

Funding for MIRROR DANCE was provided by