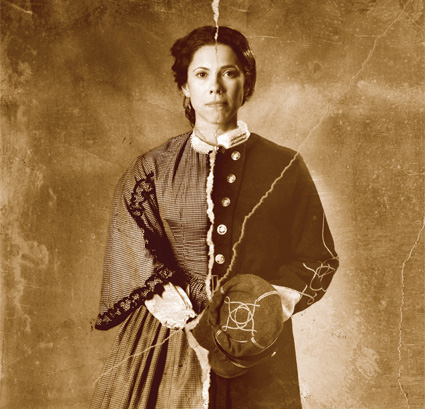 Shrouded in mystery and long the subject of debate, the amazing story of Loreta Velazquez, confederate Soldier turned Union Spy, is one of the Civil War’s most gripping forgotten narratives. While the U.S. military may have recently lifted the ban on women in combat, Loreta Janeta Velazquez, a Cuban immigrant from New Orleans, was fighting in battle 150 years ago – one of an estimated 1000 women who secretly served as soldiers during the American Civil War. Who was she? Why did she fight? And what made her so dangerous she has been virtually erased from history? Directed by María Agui Carter, REBEL is the story of a woman, a myth, and the politics of national memory.

MarÍa Agui Carter is an award-winning filmmaker, scholar, and President of Iguana Films, a film and New Media company working in Spanish and English language productions. She is a graduate of Harvard University, and former staff producer for WGBH Boston. Ms. Agui Carter was the only woman director commissioned for Discovery En Español’s Director’s Showcase series with her dramatic film Cleats, and her work has premiered at film festivals including Tribeca (Chevolution, Writer) and the LA Latino film festival (Cleats, Writer/Director). She began her career in public television, producing documentaries about the Latino community for the La Plaza series on WGBH in Boston. Her credits as Writer/Producer/Director include many films for PBS including Tango Duel Dance (La Plaza Series), Rumble Over West Side Story (La Plaza series) and The Devil’s Music (National Program Service, PBS). She has served as a consulting producer for numerous series and independent projects for PBS and cable, including The College Track Series on access to college for underprivileged kids (Pilot producer) and the Unnatural Causes Series on health disparities in America (Consulting Producer). Her recently completed new feature documentary about women war journalists, No Job For a Woman (Producer), opened at the UN Women’s Film Festival in 2011. Her latest independent feature documentary film Rebel about a woman Civil War soldier, is slated for PBS broadcast in January 2013. She has been a visiting scholar at Harvard, Tulane, and Brandeis, and the recipient of a Peabody Gardner, Warren, Rockefeller, CPB/PBS producer’s Academy, and NALIP Producer’s Academy Fellowships. She is a member of the Writer’s Guild of America, is Chair of the Board of NALIP (National Association of Latino Independent Producers), and is past Chair of the New England based social issue filmmaker’s group Filmmaker’s Collaborative. She is a native of Ecuador and grew up Nuyorican.

DVD copies of this program are currently not available.