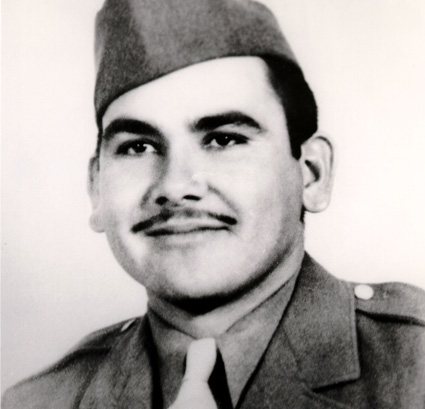 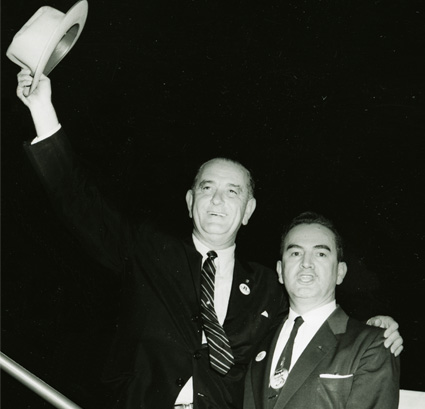 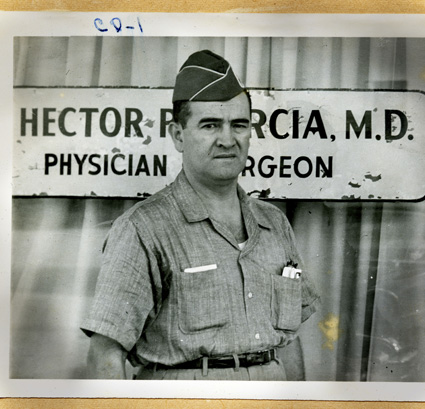 Private Felix Longoria was killed in battle fighting the Japanese during World War II. But when his body was sent home to Three Rivers, Texas, the town’s only funeral parlor refused to allow his family to use their chapel because “the whites wouldn’t like it.” The incident sparked national outrage and brought together two savvy political leaders, Senator Lyndon Johnson and Dr. Hector Garcia. Their complex, sometimes contentious relationship would help Latinos become a national political force for the first time in American history. The Longoria Affair would also propel John Kennedy to the White House, and lead President Johnson to sign the most important civil rights legislation of the twentieth century. THE LONGORIA AFFAIR, directed by award-winning filmmaker John J. Valadez and narrated by actor Tony Plana, will premiere on the Emmy® Award–winning PBS series Independent Lens on Tuesday, November 9, 2010 at 10:30 PM (check local listings). The film is simultaneously broadcasting in Spanish via the SAP channel and Independent Lens is excited to offer THE LONGORIA AFFAIR for free in its entirety online in English from November 10 through November 16. The Spanish version of the film will be available to stream from November 11 until January 10, 2011. Visit our video portal on PBS.org to view the film and www.thelongoriaaffair.com for more information.

In the south Texas town of Three Rivers, segregation between the Anglo and Mexican American communities had long been a way of life. But with the onset of World War II, men and women from both communities joined together to support the war effort. One of them was a young Mexican-American husband and father named Felix Longoria.

A decorated soldier, Private Longoria was killed in battle in the Philippines. When his remains were returned, his widow Beatrice wanted him to be honored in his hometown. She was devastated when the funeral home owner, Tom Kennedy, denied her family the use of the chapel. Kennedy would later tell a reporter, “We never let Latins use the chapel and we don’t intend to start now.”

Beatrice sought help from Hector Garcia, a doctor from Corpus Christi who was making a name for himself as a hard-edged civil rights advocate. During the war, Garcia had been a surgeon and commander of a field hospital near the front lines in Europe. After the war, he returned to South Texas where thousands of Mexican Americans desperately needed medical care. Many of Garcia’s patients were veterans but were unable to get care from the Veterans Administration. They told him that they couldn’t get money to go to school or start businesses — benefits white veterans were receiving as part of the GI Bill. Garcia began to mobilize, creating an organization to fight for their rights called the American GI Forum.

Incensed by Mrs. Longoria’s plight, Garcia called the local paper and fired off telegrams to elected officials demanding justice. One telegram went to the newly elected junior Senator from Texas, Lyndon Baines Johnson. Twenty years earlier, Johnson had been principal of the segregated Mexican American school in Cotulla, just 60 miles west of Three Rivers. He never forgot the poverty and racism he witnessed there.

The Longoria Affair created an enduring alliance between Lyndon Johnson and Dr. Garcia. Over the next 15 years, their complex, sometimes contentious relationship would help forge Latinos into a national force for the first time in American history. Their alliance would help carry John F. Kennedy to the White House and ultimately lead to Johnson’s signature on the most important civil rights legislation of the 20th century.

After Kennedy’s death, Johnson would bring more Mexican-Americans into the federal government than any President in history. The Civil Rights Act of 1964 desegregated public accommodations throughout the country — making it illegal for a funeral home owner to deny services based on race. The 1965 Voting Rights Act ended the Poll Tax and finally gave Mexican Americans and others the legal tools to challenge discriminatory voting practices. Sixteen years after the Longoria Affair, Latinos would be elected to local school boards and city councils. They would become mayors, legislators, governors and judges in record numbers. For Garcia, it was a triumph.

THE LONGORIA AFFAIR is a co-production of John J. Valadez, WGBH/Boston, and the Independent Television Service (ITVS) in association with Latino Public Broadcasting (LPB), with funding provided by the Corporation for Public Broadcasting, PBS, and the Houston Endowment.

John Valadez has been writing, producing and directing award winning, nationally broadcast documentaries for the past sixteen years. Last year his film The Chicano Wave, a history of Mexican-American music, for the PBS/BBC series Latin Music USA received a primetime national broadcast in both the United States and Europe. Valadez has had two films on the acclaimed PBS series POV — Passin’ It On, about the false imprisonment of a former leader of the Black Panther Party and The Last Conquistador, about an artist who must face the moral implications of his work as he creates a statue of a Spanish explorer who committed genocide. He directed the first hour of the PBS series Making Peace about Chicano writer and former gang leader Luis Rodriguez and produced The Divide, the first hour of the PBS series Matters of Race. Valadez was a director for the PBS series Visiones: Latino Arts & Culture and he was also a producer of the prime-time PBS special Beyond Brown. The film looked at the re-segregation of American schools 50 years after the Supreme Court decision Brown v. Board of Ed. At CNN, Valadez wrote, directed and produced the award winning film High Stakes Testing, for CNN Presents. The film was an hour-long hard-hitting investigative film about the Bush administration’s education policies. Valadez will be a writer, producer, director of the forthcoming six-hour PBS series Latino Americans.

Valadez has twice been a New York Foundation for the Arts Fellow, is a Rockefeller Fellow, and a PBS/CPB Producers Academy Fellow. He regularly lectures at universities across the United States. A member of The Writers Guild of America East, Valadez is also a founding member of the National Association of Latino Independent Producers (NALIP) and graduate of the film program at New York University’s Tisch School of the Arts.