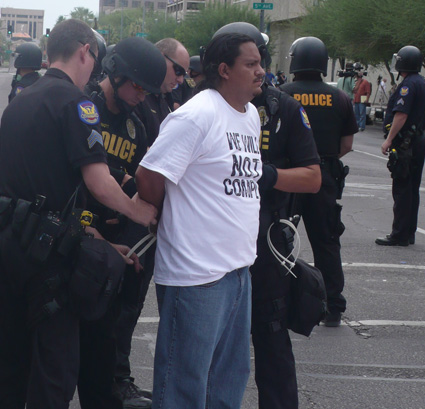 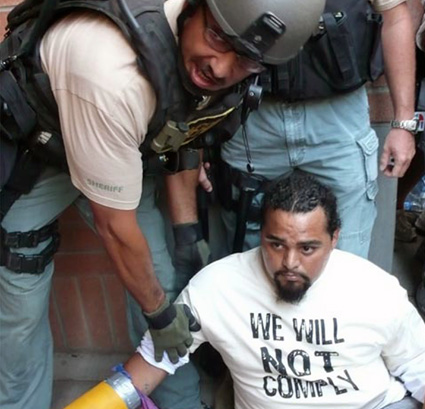 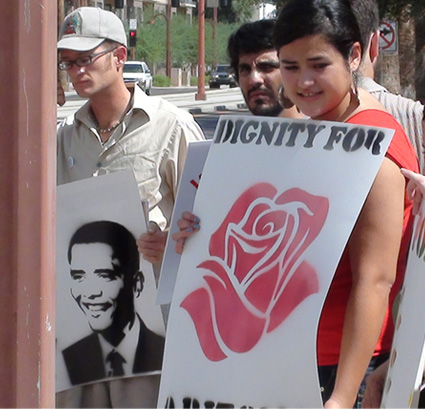 Mixing in interviews with footage of heated protest rallies and television coverage, the film tells the stories of Arizonans on all sides of this divisive issue — activists, politicians, Latino immigrants, ranchers, controversial Sheriff Joe Arpaio and the newly empowered Tea Party movement, for whom illegal immigration is a flashpoint subject — depicting a state and its people testing the edges of our democratic values.

Arizona’s enforcement-led policy, which grew out of its unique position as a frontline border state, is reshaping the national conversation around immigration reform. With dozens of states considering a similar approach, The State of Arizona holds up a mirror, asking Americans who they are, and who they want to be.

Carlos Sandoval is the co-director/producer of the award-winning documentaries A Class Apart(American Experience 2009, Imagen Award), soon to be a major motion picture, andFarmingville (P.O.V. 2004, Sundance Special Jury Prize), which was about a small suburban town in the wake of the hate-based attempted murder of two Mexican day laborers. A lawyer and writer, Sandoval’s work has appeared in anthologies and The New York Times. His experience as a lawyer includes telecommunications and complex litigation. Prior to attending law school, Sandoval worked on immigration and refugee affairs as a member of the U.S. delegation to the United Nations, and as a program officer for The Century Foundation.

Catherine Tambini is the co-director/producer of the award-winning documentary Farmingville. Ms. Tambini co-produced the Academy Award-nominated documentary Suzanne Farrell: Elusive Muse, which aired on PBS’s Great Performances/Dance In America. She field produced and shot portions of MTV’s series I’m From Rolling Stone and TLC’s Pageant Perfect. She was the production manager for Connie and Ruthie, Every Room in the House (HBO) andBest Man (Cinemax). Tambini assisted in the production design of many well-known Hollywood films, including The Hand That Rocks The Cradle, Steel Magnolias, True Colors, andThe Secret of My Success. Born in Oklahoma City, Oklahoma, she holds a Bachelor of Fine Arts degree from the University of Oklahoma and a Master of Fine Arts degree from New York University’s Tisch School of the Arts.

LINKS+
PROGRAM RELATED LINKS
Independent Lens Website
www.pbs.org/independentlens/state-of-arizona/film.html
About Us
Latino Public Broadcasting is the leader of the development, production, acquisition and distribution of non-commercial educational and cultural media that is representative of Latino people, or addresses issues of particular interest to Latino Americans. These programs are produced for dissemination to the public broadcasting stations and other public telecommunication entities. LPB provides a voice to the diverse Latino community on public media throughout the United States.
Subscribe to e-Voz Newsletter
Contact Us
3575 Cahuenga Blvd. Suite # 630 Los Angeles, CA 90068 Phone: (323) 969-8000 E-Mail: info@lpbp.org
CLOSE
VIDEO NOT CURRENTLY AVAILABLE
CLOSE